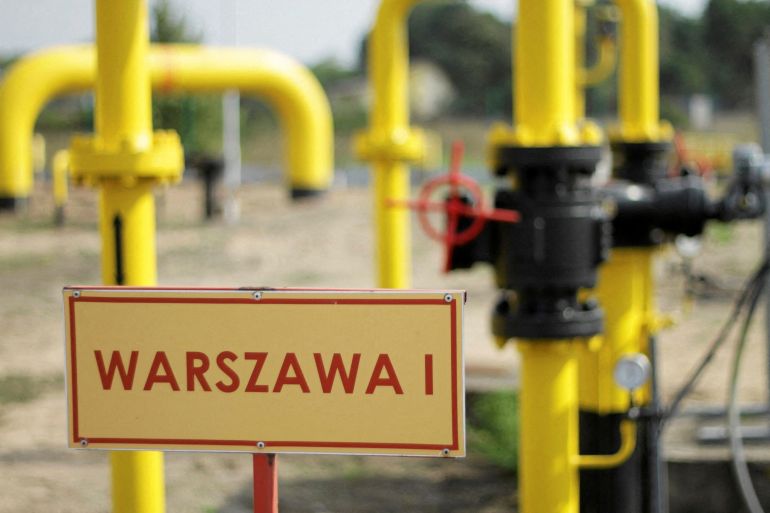 Polish and Bulgarian officials say Russia is cutting off gas deliveries to their countries after their refusal to pay in Russian roubles, a demand made by President Vladimir Putin as the West tightened sanctions over the war in Ukraine.

Poland’s state-owned PGNiG, citing the Russian energy giant Gazprom, said the suspension would come into effect at 8 am local time (06:00 GMT) on Wednesday.

Gazprom did not confirm the move, according to Russia’s TASS news agency. But a spokesperson, Sergey Kupriyanov, told reporters that the company had stressed on Tuesday that Poland was “today obliged to pay for gas supplies in accordance with the new payment procedure”.

The Reuters news agency, citing data from the European Network of gas transmission operators, said Russia has halted its gas supplies to Poland under its Yamal contract. But it said there was no word if Bulgaria’s supplies were also cut.

The reported suspensions would be the first since Putin’s announcement last month that “unfriendly foreign buyers” would have to transact with Gazprom in roubles instead of United States dollars and euros. Only Hungary has agreed to do so, with other countries rejecting the demand as an unacceptable one-sided breach of contracts and a violation of sanctions.

If deliveries were halted to other countries as well, it could cause economic pain in Europe, driving natural gas prices up and possibly leading to rationing – but it would also deal a major blow to Russia’s own economy.

Ukraine responded to the reported moves by accusing Russia of blackmailing Europe over energy, an attempt it said was aimed at breaking its allies.

“The ultimate goal of Russia’s leadership is not just to seize the territory of Ukraine, but to dismember the entire centre and east of Europe and deal a global blow to democracy,” Ukraine’s President Volodymyr Zelenskyy said late on Tuesday.

His chief of staff, Andriy Yermak, said Russia was “beginning the gas blackmail of Europe”.

“Russia is trying to shatter the unity of our allies,” Yermak said.

Before the invasion of Ukraine on February 24, Europe received about 40 percent of its gas from Russia, mainly for residential heating, electrical generation, and the fuel industry, with Germany particularly dependent on it. The imports have continued despite the war.

WHO recommends “mpox” as new name for monkeypox

Approximately 60 percent of imports are paid in euros, and the rest in dollars. Putin’s demand was apparently intended to help bolster the Russian currency against Western sanctions.

In Washington, DC, White House Press Secretary Jen Psaki said the US had been preparing for such a cut-off by Russia.

“Some of that has been asking some countries in Asia who have excess supply to provide that to Europe,” Psaki said. “We’ve done that in some cases, and it’s been an ongoing effort.”

‘No shortage in Polish homes’

Wednesday’s cut-offs will affect deliveries of Russian gas to Poland through the Yamal-Europe pipeline, according to PGNiG, and to Bulgaria via the TurkStream pipeline, that country’s energy ministry said.

The Yamal-Europe pipeline carries gas from Russia to Poland and Germany, via Belarus. Poland has been receiving some 9 billion cubic metres annually, fulfilling some 45 percent of the country’s needs.

But Polish Prime Minister Mateusz Morawiecki said his country did not need to draw on reserves as its gas storage facilities were 76 percent full. He also said Poland was ready to obtain necessary supplies from sources other than the Yamal pipeline.

Polish Climate Minister Anna Moskwa also said the country was prepared to make do after having worked to reduce its reliance on Russian energy sources. Several years ago, Poland opened its first terminal for liquefied natural gas (LNG) in Swinoujscie on the Baltic Sea coast, and later this year, a pipeline from Norway is to become operational.

“There will be no shortage of gas in Polish homes,” Moskwa tweeted.

Bulgaria, which is almost completely reliant on Russian gas imports, said it was working with state-owned gas operators Bulgargaz and Bulgartransgaz to find alternative sources and that no restrictions on domestic consumption would be imposed for now.

Poland has been a strong supporter of neighbouring Ukraine during the Russian invasion and has acted as a transit point for weapons the United States and other Western nations have provided to Kyiv.

Warsaw said this week that it too was sending weaponry to Ukraine’s army in the form of tanks. On Tuesday, it announced sanctions focusing on 50 Russian oligarchs and companies, including Gazprom.

Bulgaria, once one of Moscow’s closest allies, has cut many of its ties with Russia after a new liberal government took the reins last December and also in the wake of the invasion. It has supported sanctions against Russia and sent humanitarian aid to Ukraine but has been hesitant to provide military aid.

However, Prime Minister Kiril Petkov and members of his coalition government were expected in Kyiv on Wednesday for talks about further assistance.

WHO recommends “mpox” as new name for monkeypox