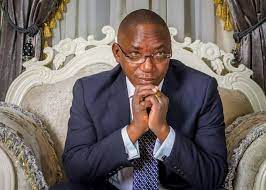 It was the 16th Century English renowned playwright, actor and poet Willian Shakespeare who said “All the world’s a stage and all the men and women merely players. They have their exits and their entrances and one man in his time plays many parts, His acts being seven ages”.

That aptly sums up the man Solomon Selcap Dalung a man of many parts; Longest-serving Minister of Youth and Sports Development in the history of Nigeria, Chairman of Africa Union Sports Council Region 2 Council of Ministers, a Barrister at Law, a Lecturer, a cultural Icon, an uncommon politician, Igbarman Otarok, the Magayakin Bukuyum and Garkuwan Arewa da Jagoran Talakawa among many others.

These glittering feathers that today adorn the cap of Barrister Dalung are however in stark contrast with his humble beginning.

He was born on 26 September 1964 in Sabon Gida, a remote village in present-day Langtang South Local Government Area (LGA), of Plateau State.

He had his primary education at the Local Education Authority (LEA) Primary School, Sabon Gida from 1971 to 1977.

Thereafter he proceeded to the prestigious Government College, Keffi from 1977-979 when he experienced what it was like for life to throw rocks at you.

His parents who had struggled to pay his school fees could no longer cope and he regrettably had to drop out of school.

But you know what is said about life throwing rocks at you. You can either give up and be crushed under or use the rocks to build a solid foundation for greatness.

Dalung chose the latter and enlisted in the Nigerian Prisons Service as a Prison Assistant in 1982.

With the steady income flowing from his job Dalung once again faced the pursuit of his formal education, combining his work with Extra Mural Classes.

His resilience and doggedness, qualities that were to define his general approach to life, paid off when he sat for and passed his GCE Exams in 1989/90.

He later enrolled in the Law Programme of the University of Jos and obtained a Bachelor of Laws (LLB) degree in 2000. He was subsequently called to the Nigerian Bar after completing Law School at the Nigerian Law School, Bwari in 2001.

With his new qualification as an Attorney Barrister Dalung was moved to the legal department of the Nigerian Prisons Service Headquarters Abuja in 2004 from where he retired and took up an appointment the same year as a Lecturer in the Faculty of Law, University of Jos.

In 2007 the young man who many had written off because of the initial hiccups in his educational pursuit proved the cynics wrong by further obtaining a Master of Laws Degree while lecturing at the University Jos, thus proving the words of C.S Lewis that “Hardship prepares an ordinary person for an extraordinary destiny”.

Ralph Waldo Emerson also captured this aptly in these words; “The only person you are destined to become is the person you decide to be”. These schools of thought were also evident in Barrister Solomon Selcap Dalung’s political career which flourished under the impeccable mentorship of the Great Emancipator, the first Executive Governor of Plateau State and Adviser Emeritus to former President Olusegun Obasanjo, the late Chief Solomon Daushep Lar.

With such pedigree it was no surprise therefore when in 2007 Barrister Dalung was appointed the Chairman of Langtang South Local Government Area, a position he held till May 2008. While serving in this capacity he was elected Plateau State Deputy Chairman of the Association of Local Government Chairmen of Nigeria (ALGON), later becoming its Chairman.

Honourable Barrister Solomon is also an outspoken and unrepentant advocate of equity and justice a character trait that has its roots in students’ union activism in his days in the university during which he held various positions of trust in the Students Union Government.

That social activism and outspokenness have characterized his public life attracting as many admirers as enemies to him. In fact, Dalung is as comfortable as an Executive Chair in an office setting as he is in the trenches leading a demonstration against injustice. With him, there is no pretence.

Attracted by these rare qualities Dalung was invited into the membership of the influential Northern Elders Forum.

Such sincerity and integrity similarly struck a familiar chord in someone who himself is an embodiment of integrity, the architect of modern Nigeria, President Muhammadu Buhari who appointed him into his Transitional Committee after his historic victory at the polls in 2015.

Buhari thereafter appointed him a Minister of the Federal Republic of Nigeria and put him in charge of what had previously existed as two separate Ministries but was now merged into the Federal Ministry of Youth and Sports Development, under the reforms that streamlined the number of Federal Ministries in the country.

Nasarawa APC Chairmanship: Why Hon Aliyu Bello Is The Answer

APC, Gov Buni, the birthing of a truly National Party, by Johnson…

He held that position from November 2015 to 28 May 2019 making him the longest-serving Minister in a Ministry that had a notorious reputation for the highest turnover of Ministers. Instead of being consumed as many of the power brokers in the sports sector clamoured for Dalung became what he jokingly refers to as the “undertaker” in the sector.

His records in the Federal Ministry of Youth and Sports Development speak for themselves.

Is it the masterstroke in form of the democratization of the Boards of National Sports Federations which led to the emergence of more credible and passionate leadership leading to greater stability and improved performance by these Federations?

As at the last count, Nigeria had won over 1000 medals in all competitions from continental to global levels.

Or do you want to talk about the revival and successful organisation of the 19th National Sports Festival tagged ABUJA 2018, after series of postponements for six years with serious consequences on sports development?

Under his watch, Nigeria became the 1st African country to win Scrabble World Championship back to back in 2015 and 2017.

Also, under Dalung’s watch for the first time in over 100 years of playing cricket in the country, the Nigerian Cricket Team won the U19 African Championship qualified for the U19 Cricket World Cup.

Another first under Barrister Dalung was the performance of the Nigeria Female Basketball Team D’Tigress who not only won the African Championship in 2017 but went on to become the 1st African Team to reach the quarter-final stage of the FIBA World Cup in 2018 in Spain.

Nigeria’s Aruna Qadiri became the first African player to qualify for the Round of 32 at the 2019 World Championship in Hungary.

Nigeria is today an unrivalled continental King in Para-Powerlifting and a major global player proudly holding world records in the sport.

The National Stadium Olympic size swimming pool has been a beehive of activities following its renovation after many years of being abandoned until Dalung came along.

The achievements in the Youth Sector are no less impressive ranging from the establishment of the National Peer Group Educator Programme on Financial Inclusion for Volunteer Corps Members (NAPGEP) in collaboration with CBN and NYSC and Financial Literacy Training with over 45,000 end beneficiaries sensitized by VCM’s from 2017 to 2018.

Thousands of youths have benefitted from entrepreneurship development programmes locally and in the sub-region through collaboration with ECOWAS among numerous other programmes.

Distinguished guests, ladies and gentlemen if we are to continue talking about Solomon Dalung we may remain here for the rest of the day.

However, let these memorable words by Aristotle the Greek philosopher suffice as a summary; “Excellence is never an accident. It is always the result of high intention, sincere effort and intelligent execution; it represents the wise choice of many alternatives-choice, not chance determines your destiny”.

Dalung such choice has often come at a great cost, but a price worth paying to be on the right side of history.

It has been an honour serving under such a man with an eye on history.

Distinguished guests, Ladies and gentlemen, I present to you, a man of uncommon courage and determination, an unrepentant advocate of equity and justice, longest-serving Minister of Youth and Sports Development, the Igbarman Otarok (thunder of Torah nation), Winner of the Prestigious Radio France Award, Man of the Year 2012, Magayakin Bukuyum, Iyan Talatan Mafara, Garkuwan Arewa and Champion of the masses, an ordinary man with an extra-ordinary destiny Comrade Solomon Selcap Dalung, LLB (Hons), BL, LLM,

Nasarawa APC Chairmanship: Why Hon Aliyu Bello Is The Answer

APC, Gov Buni, the birthing of a truly National Party, by Johnson Momodu