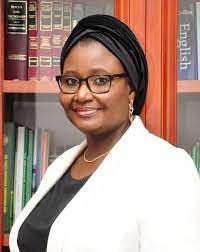 Dr Salamatu Hussaini Suleiman was born on October 27, 1960, in the famous fishing town of Argungu now in Kebbi State. Her father, late Alkali Hussaini Gwandu was an Islamic scholar and jurist from the legendary family of Alhaji Saadu, a scholar who taught as far as Egypt in the twentieth century. Her Mother Hajiya Safiyatu Hussaini is a princess from the Royal Family of Gwandu Emirate and holds the prestigious title of Gimbiyar Gwandu.

Dr Salamatu Hussaini Suleiman, by dint of sheer hard work, tenacity, resilience and with the help of providence, rose to become a Minister of the Federal Republic of Nigeria, and also a Commissioner for Political Affairs, Peace and Security at the Economic Community of West African States (ECOWAS) Commission (the first woman to hold such a position)

Barrister Salamatu had her primary education at MMakerGandu Primary School, Birnin-Kebbi. In 1973, she sat for the National Common Entrance examination and passed with flying colours and thus gained entry into the prestigious Queen’s College, Lagos. She passed out with Division 1 in the West African School Certificate Examination in 1977. She proceeded to the School of Basic Studies of the Ahmadu Bello University Zaria, where she obtained her ‘A’ Levels (the Interim Joint Matriculation Board Examination Certificate).

In 1978, following in the footsteps of her father, she chose to study law and enrolled at the Ahmadu Bello University Zaria, Kongo Campus. She was actively involved in Student Unionism and was elected Vice President of the Student’s Union Government in 1979. She also excelled academically and came top of the class in the Annual Moot Court Competition, Faculty of Law Ahmadu Bello University, Zaria in 1981 before she graduated with the LLB (Hons) degree. Between 1981 and 1982, she was enrolled in the Nigerian Law School where she also excelled and was called to the Nigerian bar. Between 1982 and 1983, she served her.

National Youth Service Corps with the Sokoto State Ministry of Justice and continued her professional career there as a State Counsel. Her quest for scholarship saw her proceed to the London School of Economics and Political Science, where she bagged the LLM with Distinction in Multinational Enterprise and the Law in 1987.

In 1989, she veered into the corporate sector and joined the Continental Merchant Bank, where she worked in various capacities, rising to the position of Company Secretary. She moved to NAL Merchant Bank from 1996 to 1997, and then to Aluminum Smelter Company of Nigeria (ALSCON) as Legal Adviser/Company Secretary, a position she held until 2001 when she left to take up another appointment as Secretary/ Director of Legal Services of the Securities and Exchange Commission (SEC).

Her exemplary commitment, honesty, and oan utstanding sense of patriotism as a technocrat brought her to the attention of President Umaru Musa Yar’adua who appointed her as the Honorable Minister of Women Affairs and Social Development, in December 2008. In 2010, she was reappointed Honorable Minister of State for Foreign Affairs by HE President Goodluck Ebele Jonathan, a position she held until May 2011. In 2012, she was appointed Commissioner, Political Affairs, Peace and Security, ECOWAS Commission, a position she held for a term of four years up to April 2016.

Since she left the ECOWAS, Barrister Salamatu has been running her Legal firm, Hussaini Suleiman & Co. She also serves as an Independent non-executive Director on the Boards of Stanbic IBTC Holdings Plc, Flour Mills of Nigeria Plc, West African Network for Peacebuilding (WANEP), and a few other business interests. One of her greatest passions however is poverty eradication through the empowerment of women and youth

and the promotion of education for all. This is done through a Charity organization, Alkali Hussaini Foundation, which she founded in 2007.

For its high performance and impact on society, the Foundation has enjoyed the strategic collaboration and partnership with various organizations including the Federal Ministry of Women Affairs and Social Development, Federal Ministry of Agriculture, Bill and Melinda Gate Foundation, (through PACT Nig.), T.Y Danjuma Foundation,  Kebbi State Government and Nigeria Turkish International Colleges (NTIC) Foundation

Dr Salamatu Hussaini Suleiman received an Honorary Doctorate Degree from the University of Abuja in 2019, she is a fellow of Waziri Umaru Federal Polytechnic, Birnin-Kebbi, and a Fellow of the Chartered Institute of Mediators and Conciliators (ICMC). In 2018, she bagged the prestigious ABU Alumni Career Service Award. In recognition of her efforts to promote political stability and peace in the ECOWAS region, she was bestowed with the West African Peace Building Fellowship in Accra, Ghana by the West African Network for peacebuilding (a regional NGO that works with stakeholders to promote peace in the ECOWAS and the AU Countries).

She has attended various development programs at home and abroad, including at the prestigious Harvard Kennedy School of Governance and the Harvard Business School. She has visited many countries around the world and received a letter of commendation for exemplary service from the Federal Government of Nigeria, the ECOWAS Commission, and other establishments where she has served. She is a family person, a doting grandmother, and enjoys reading, travelling, and humanitarian activities.

Some of her key achievements are as follows:

The ECOWAS Mission in Guinea Bissau (ECOMIB) April 2012. The African Led International Support Mission to Mali (AFISMA) January 2013. Implementation of an effective ECOWAS Integrated Maritime Strategy, leading to the setting up of 3 Maritime Zones, a Regional Center and an Interregional Coordination Center in collaboration with the Economic Community of Central African States (ECCAS); Implementation of a Defence and Security Sector Reform (DSSR) programs in Guinea Bissau; – Resource mobilization for ECOWAS including military equipment from the USA, Germany, and China to enhance the operational capacity of the ESF.

Establishment of the National Early Warning and Response Mechanism to enhance ECOWAS Member States capabilities to engage in the prevention and management of national low-intensity conflicts;

Dr Suleiman is consistently involved in community development programs in Kebbi State, in addition to the work undertaken under the Foundation. She currently serves as a Grand Patron of Salamatu Hussaini Government Girls Secondary School, one of the major girls’ educational institutions in Birnin[1]Kebbi, named after her by the State Government, where she has provided support in critical furniture, learning equipment, and mentoring of the students periodically. She has extended support for the renovation of schools and provision of learning materials, to schools and engages regularly in active advocacy with all stakeholders to improve the quality of education, empower women and the less privileged, and generally contribute to poverty.

Healing Nigeria in the spirit of Adha