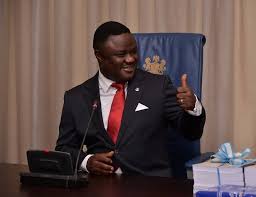 The Federal Government has formally approved the establishment of the Agricultural Equipment and Machinery Development Institute in Lafia, to serve the North Central geopolitical zone.

The newly approved institute, will operate under the National Agency for Science and Engineering Infrastructure (NASENI).

The NASENI boss while conveying the letter approving the agricultural equipment and machinery institute in Lafia, equally requested for the Nasarawa State Government to provide a temporary site for the institute to kick-off immediately, as well as a permanent site, among other interventions.

According to Professor Haruna, unlike other institutes under his agency, the Lafia Agriculture Equipment and Machinery Development Institute, is a specialised institute that will develop machinery and tools, that will ease agricultural trades, food processing, preservation and innovation, in all the value chain of agricultural practice.

“Its intended that all the equipment needed in the agricultural sector, from small to heavy machinery, will be produced locally and here in Lafia,” he stated.

He explained that, the institute will commence assembling certain equipment locally and in collaboration with other NASENI centres, stressing that the other businesses that will be created as a result of the coming onboard of the institute, will be countless.

The NASENI executive vice chairman, used the opportunity of the visit to recount the process leading to the approval of the institute in Lafia, by President Muhammadu Buhari.

He recalled that, earlier on, Governor Abdullahi Sule has put in a request at the presidency, seeking for the setting up of a NASENI institute in Lafia, the state capital, mostly because of his interest in skills acquisition and technology based job creation, especially for the teeming youths of Nasarawa State.

Prof Sani disclosed that, as a result of the request by Sule, the Federal Government, after a careful study, decided to establish an agricultural equipment and machinery development institute in each of the six geopolitical zones of the country.

“After a rigorous assessment, monitoring peace, progress and commitment to agriculture, among other indicators, the Presidency decided that that of North Central should be hosted in Nasarawa State,” Haruna stated.

He equally used the opportunity of the event, to appreciate Sule for supporting his agency during the meeting of the National Economic Council, where NASENI presented a memo, requesting for the endorsement of the NEC, towards the approval of the agency’s statutory fund.

Responding, Governor Sule thanked the President for giving the approval for the establishing of the agricultural equipment and machinery development institute in Lafia, the state capital.

According to Engineer Sule, the institute is coming at no better time, especially with Nasarawa State being mostly agrarian.

He pointed out that siting the institute in Nasarawa State will bring much needed ease to farmers who have continued to suffer as a result of poor yield, due to unavailability of needed equipment, proper enlightenment on farming techniques, as well as poor harvest and post harvest losses.

Engineer Sule was emphatic that, locating the institute in Lafia, which is central, will serve big commercial agricultural enterprises operating in the state, especially, Dangote Group in Awe, Olams in Doma, Azman Rice and Flour Mills Nigeria Plc, with all producing sugar, rice and cassava.

Regarding the request for interventions from the part of his administration, the governor disclosed that, already two sites have been identified for the newly approved institute.

“The SGNS also has been working along with the Head of Service, to ensure that we have a temporary site for the take-off of the institute,” he stated.

Being a technical person, Engineer Sule couldn’t hide his excitement.

“As a technical person, I am so excited about this idea, it’s going to afford training for our youths in Nasarawa State,” the governor added.