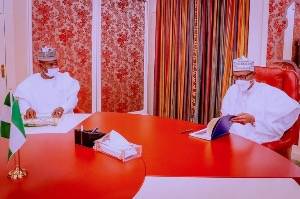 Governor Yahaya Bello of Kogi has expressed the State Government’s appreciation to President Muhammadu Buhari recognizing it as one of the Oil-producing states.

This is contained in a statement by Mr Onogwu Muhammed, Chief Press Secretary to Bello on Wednesday.

”Bello conveyed his thank you message to Mr President during his visit to the Presidential Villa, Abuja, on Tuesday.

”Kogi was listed among Nigeria’s oil producing States by the Revenue Mobilisation Allocation and Fiscal Commission (RMAFC),” he said.

Bello said that he briefed Buhari on the need to resuscitate the Ajaokuta Steel Complex, in Kogi.

”The aim of my visit to Mr President was to thank him for the recognition of Kogi State as one of the Oil-producing states in the country.

“And we also discussed the issue of Ajaokuta Steel Complex which Mr President said all efforts are ongoing to ensure the Steel Complex comes up before the end of his administration,” Bello stated.

Bello also noted that with the recognition of Kogi and Anambra, the age-long oil wells dispute that resulted in unwarranted killings and destruction of properties has ended.

”Buharis’s decision has brought peaceful resolution of the dispute. The disputes between two communities of Odeke in Ibaji Local Government Area (LGA), of Kogi and Aguleri in Anambra State has come to an end.

“The Ibaji oil crisis has been on for a while and has led to large scale destruction of property with the loss of many lives.

“The Odeke and Aguleri communities of Kogi and Anambra, laid exclusive claim to the ownership of the oil in the disputed area which has been finally resolved in favour of both states.

“By history, the exploration of crude oil in Ibaji Local Government Area (LGA), which comes under the Anambra Basin in geological terms started in 1952.

“Between 1952 and 1986 three companies namely; Shell BP (now SPDC), ELF (now Total Fina Elf) and AGIP Energy have drilled 25 exploration wells, two appraisal wells and eight-core drill wells in the entire Basin out of which majority of the wells fall into Kogi” (NAN).